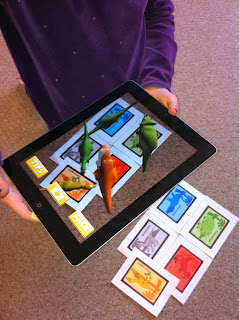 You print off the cards with a color printer.  These particular cards came with the AR flashcards for the alphabet that we blogged about on my classroom web site a few weeks ago!  Once you have the cards all you have to do is activate the app and then hold the iPad over the picture.  Magic happens!  A 3 D image of the dinosaur appears! 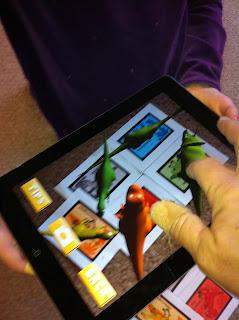 If you tap the screen, a child’s voice says the name of the dinosaur.  I thought you had to hold it over only one card at at time but the children discovered that they could get all the dinosaurs at once by putting the cards closer together! 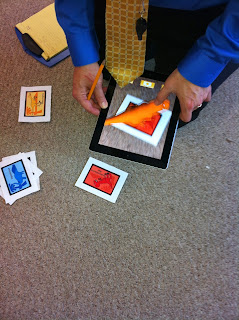 Even our principal gave it a try!

We have already played with the AR Flashcard app for the Alphabet. 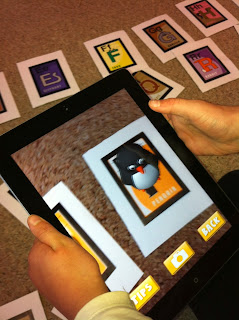 The app is called AR Flash Cards.  AR is short for Augmented Reality.  It is a fantastic app!  I printed off the Alphabet cards on my color printer at home.  Then I cut them apart.  I had already downloaded the app.  You basically open the app, place the ipad over the card and wait a little bit.  Magic happens!! 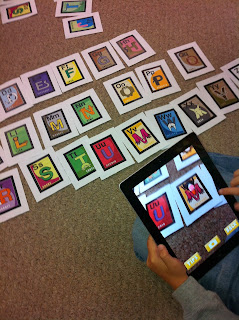 A three dimensional animation of the animal on the alphabet card appears on the screen.  When you touch the screen the audio component can be heard.  It tells the child the name of the letter and the animal!
I was able to let all the children see the magic at the same time using the projector and the special adapter cord I have for the iPad.  Later, the children used the iPads independently to try it out by themselves.
I wish I could have taped the looks on their faces when the first animation appeared!
The alphabet cards are really neat and I know we will get a lot of use out of them!  They were free!  Very easy way to get students interested in alphabet skills!  We will be having lots of fun with alphabetizing, letter sounds, spelling practice, and so on with this app! 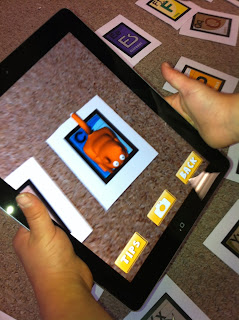 There are more cards coming soon but they have a cost attached.  I think they will be worth it! 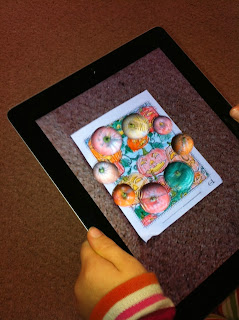 We also worked with another augmented reality app I have discovered.  It is called CoLAR Mix.
I was a bit sneaky!  I had the children color a special coloring page that I had downloaded for them.  I told them if they did a really good job we would do something really cool with it! 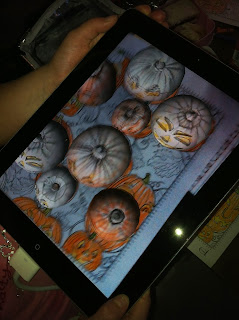 After they finished coloring, I loaded this app and just held the iPad over their coloring.  The look of their faces was priceless! 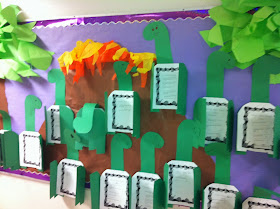 We started a new theme this week!  Can you guess?

We started off with a mini research report about dinosaurs.  Specifically apatosaurus!  I prepared a small list of facts about apatosaurus that we read together and sorted into different categories!  They were What They Look Like, What they Eat, About the Babies, and Cool Facts.  We read the facts together and as we read them we applied a code to the facts.  L for What They Look Like, E for What They Eat, B for About the Babies, and C for Cool Facts.  The children thought they should all be cool facts! 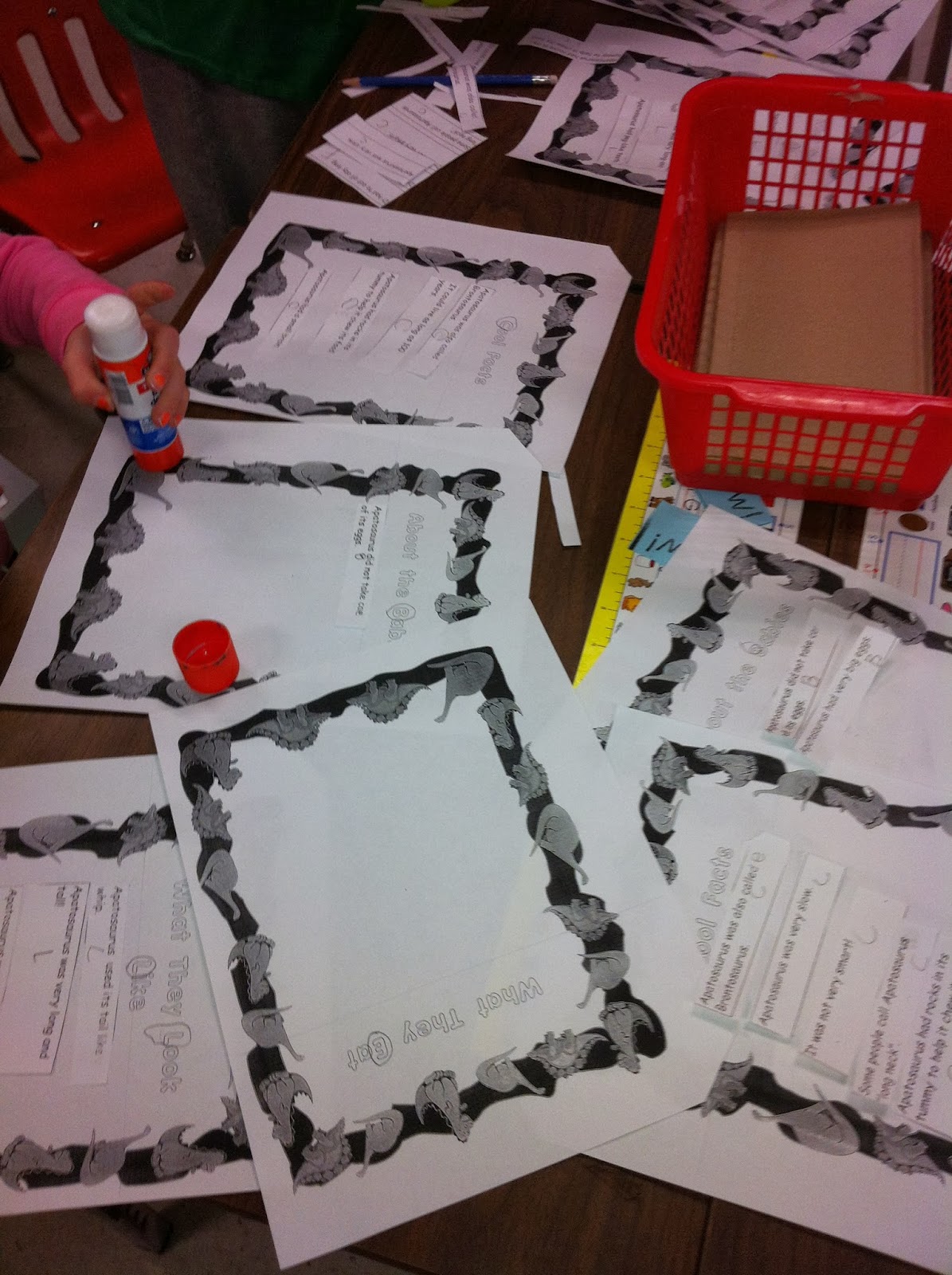 Then they cut out the facts and glued them to the appropriate page. 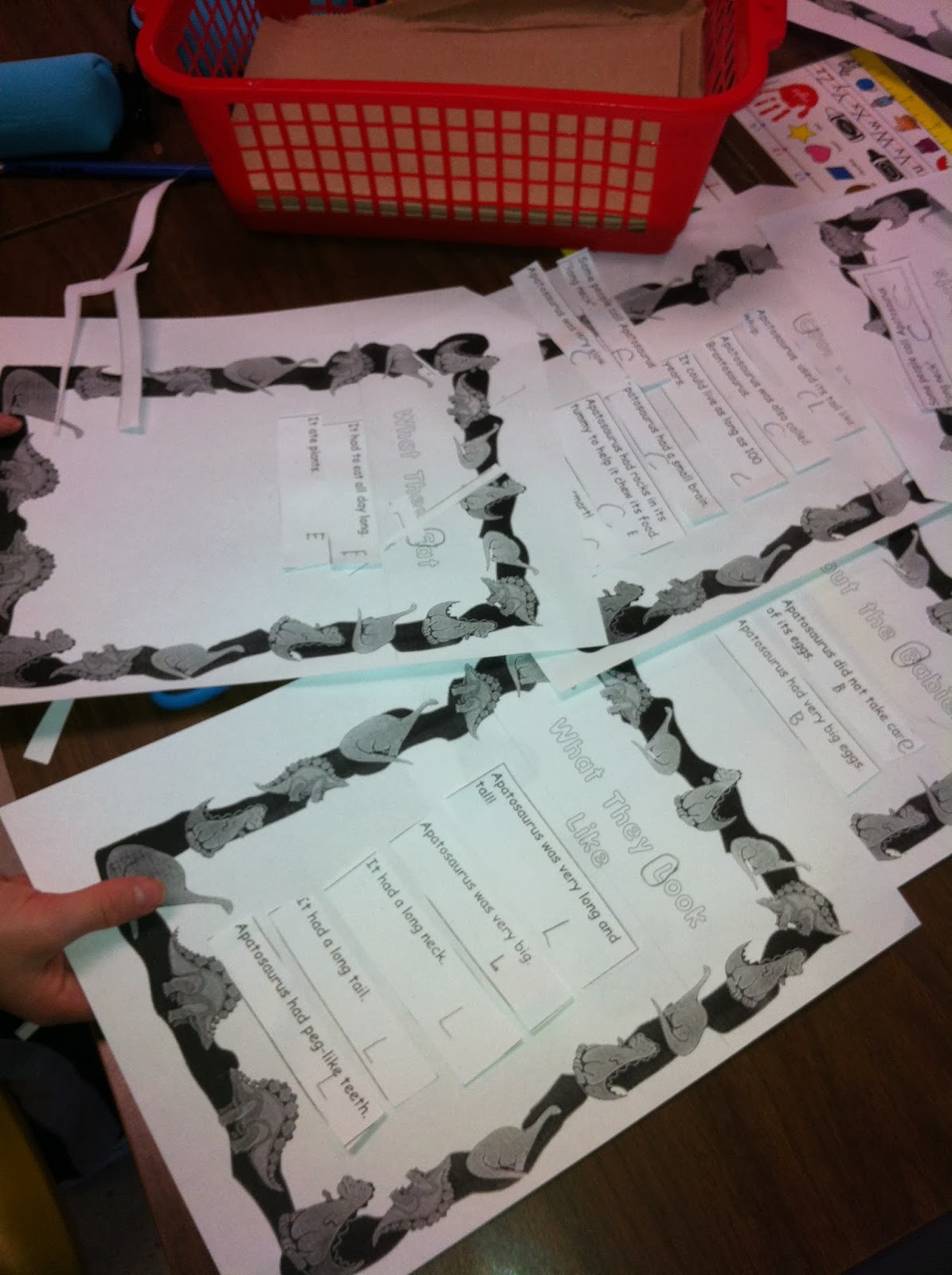 Then I staple them into the covers I had premade for them.  They attached the head and drew a face and had a funky dinosaur report to display! 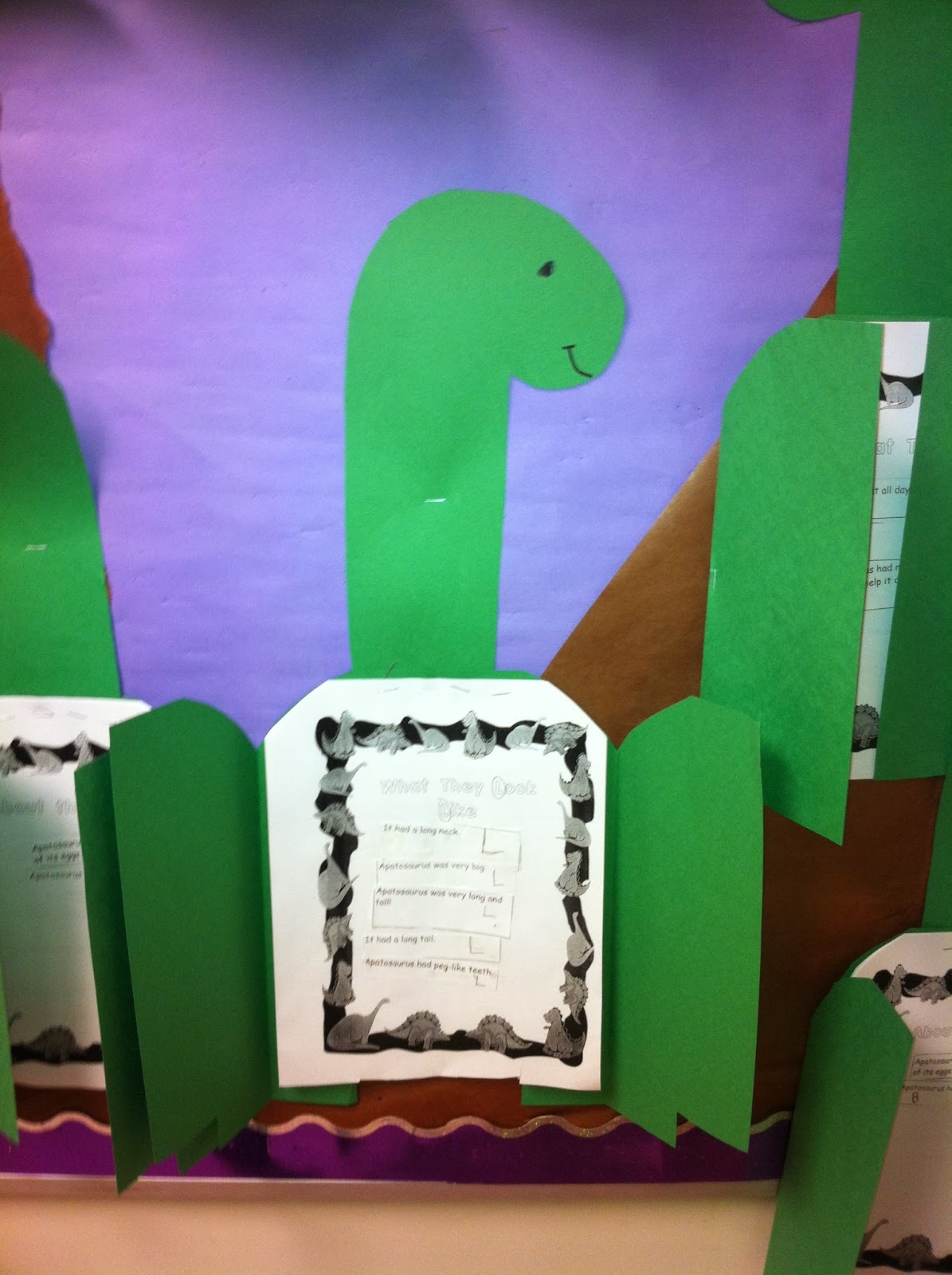 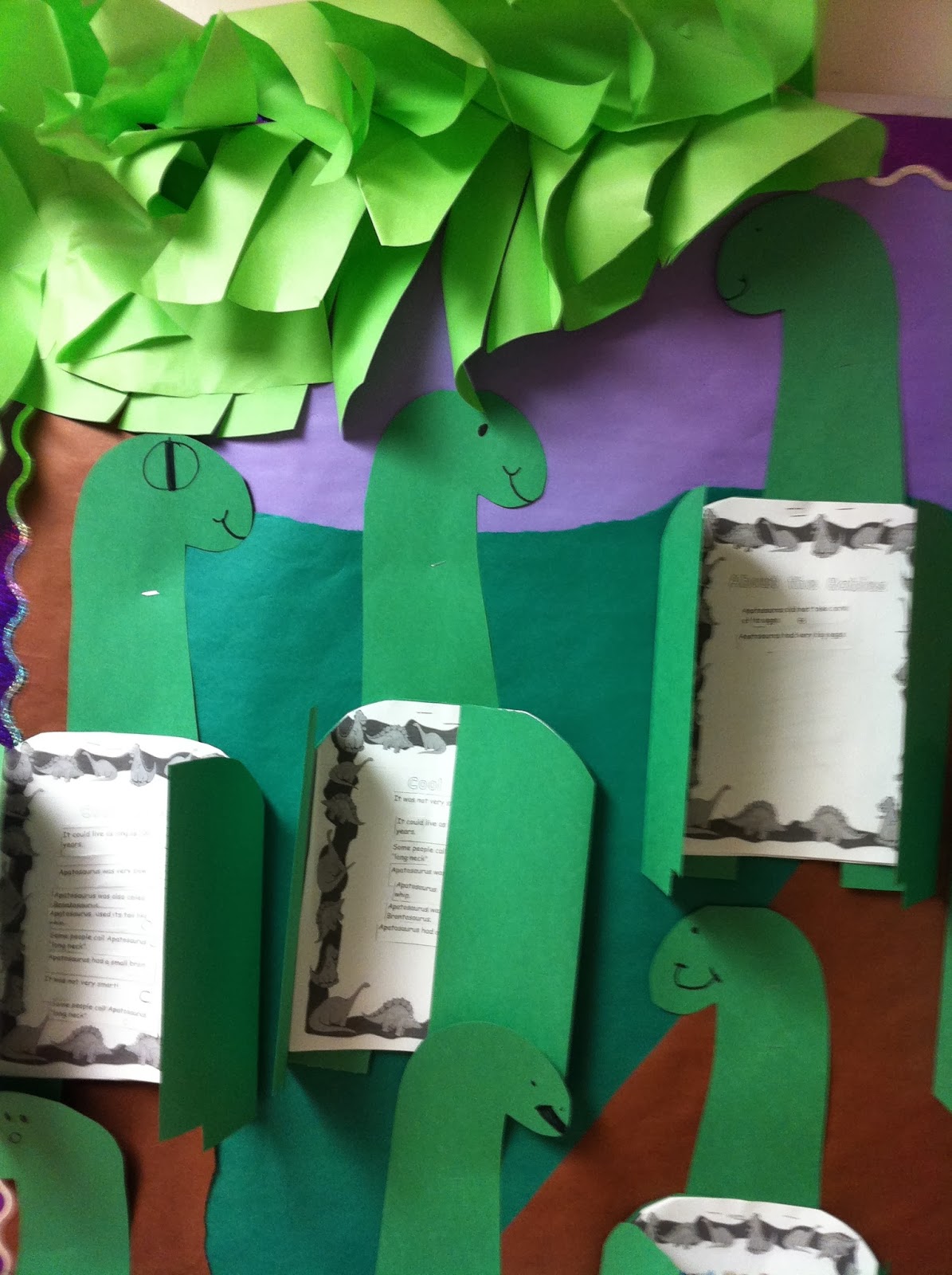